In early ’66 as the landmark Shelby/Hertz partnership got underway Shelby American had a problem. There was a shortage of GT350 “knockdown” units from Ford’s San Jose plant and Shelby simply couldn’t get enough cars to fulfill their Hertz contract in a timely fashion. So Shelby began to pull “regular” GT350s into the fold and converted them in Hertz cars. And at this time, for unknown reasons, Hertz also requested a small batch of GT350s be delivered to them in the non-Hertz color combination of white with blue stripes.

Just 18 such cars were delivered per this request to Hertz, and all were Wimbledon White with blue “GT350” side stripes (no “H”), no LeMans stripes, but the Hertz-spec chrome Magnum 500 wheels.  6S476 is one of these rare footnotes to the GT350H story.

Being an early chassis, just on the outside of the famed 252 “Carry-Over” car production, 6S476 also features 1965 GT350 style “override” traction bars, a configuration soon axed by Shelby American as a cost cutting measure.

From here 6S476’s history gets even better. Prepped by Shelby’s legendary Hi-Performance Motors it was then shipped to the similarly legendary S&C Motors in San Francisco for delivery to the Hertz agency in the same town. After a brief stint in the Hertz fleet it was sold to its original owner in early 1967, who quickly installed a Shelby Paxton supercharger setup. It would remain in California for the next 44 years until I purchased it from its owner of 27 years in 2011.

Below is the history footnote of 6S476 from the current SAAC Registry, provided by the 1965-1966 Registrar Howard Pardee:

6S476. Hertz. White. A radio was installed by Hi-Performance Motors (El Segundo, CA) 1/13/66. Shipped to S&C Motors, Inc. (San Francisco, CA) 2/4/66 for dealer prep prior to delivery to Hertz (San Francisco, CA); they were invoiced $3,514 plus $104.56 for chrome Magnum wheels plus $45.45 radio plus $20 pre-delivery plus $141.75 freight for a total $3,825.76. 4/27/66 warranty service was done for leaking gaskets at Broadway Motors (Oakland, CA) with 2,206 miles. Purchased by unknown original owner (OR) who had a Shelby Paxton supercharger installed that later had the blower seize. Purchased by way of a trade-in by Shoffner’s Auto Sales (Redding, CA). Purchased by Jack Morrison (CA) for $1,400. There were no LeMans stripes or “H” in the side stripe. Jack remembers that it had original paint, original chrome Magnum wheels and a Paxton supercharger complete except for the blower. He replaced the Magnums with stock 15 x 7 Ford rims. Purchased by unknown owner. Purchased by Lou Gerald Ford (CA) with the Paxton still on the car minus the seized Paxton blower. Purchased by Mr. and Mrs Heiser (Redding, CA) who took off the 4V carburetor and the distributor to be replaced with a 2V and a vacuum advance distributor to save on gasoline. Purchased by Rodney A. Vaira (Redding, CA) ‘84 and noted by Vaira as having all original drivetrain, sheetmetal and interior. The original intake manifold was in the trunk along with the bottom of a Shelby Paxton supercharger enclosure on the bottom of the HP 4100 Autolite carburetor. It also had the Paxton air cleaner assembly and pulley still under the hood. In ‘09 it was undergoing restoration by Shasta Mustang Supply which was documented through a multi-page thread on the SAAC Forum. It was completed 7/11 and then the car was put up for sale by Shasta on behalf of Vaira. Purchased by Colin E. Comer (Milwaukee, WI) 12/30/11. He had the Paxton setup rebuilt by Craig Conley, rebuilt the original numbers matching engine and installed a T-5 transmission, placing the original C4 Hipo automatic on a shelf for safekeeping. He bought it with 90K miles on the odometer in ’11 and it had 99K on it as of January ‘20.

As you can see 476 has an air-tight and impressive history from new. During my ownership, spanning the last decade, 476 has seen meticulous care and careful sorting which have made it one of the best driving, most entertaining ’66 GT350s one could ever find. It features 100% of its original factory sheetmetal, its guaranteed original factory numbers-matching engine, original C4 transmission (on a shelf, of course!) and an impressively original interior that retains its factory original upholstery, dash pad with original Hertz brake warning sticker, rare (and functional) parking brake warning light, and more.

The engine was rebuilt by noted race engine builder George Forge at Motor Masters Racing who fully balanced, blueprinted, and dyno tuned it to perfection. Craig Conley of Paradise Wheels just rebuilt the Paxton unit in 2020 and supplied a custom setup Holley carburetor as well. A Centerforce clutch is fitted in front of the T5 transmission, which was installed with absolutely no cutting or modifications to the chassis, and a custom balanced driveshaft throws all of that Paxton-fed power to the car’s original 3.50:1 rear gear.

In appearance, function, and performance 6S476 has few rivals. Everything works as new, right down to the radio, and with the addition of the 5 speed this car loves to loaf along with ease at unmentionable speeds on the highway. But she’ll also smoke the V Rated tires off with ease if you like as well!

In summary I think 6S476 is a truly special ’66 GT350. It is one of 18 “unicorn” “non-H” Hertz cars, delivered new through a famed dealer into a very car-friendly climate, it has a documented period installation of a genuine Shelby Paxton Supercharger (within the first 24 months of its life), a wonderful history, and today sits with all of the other ever-important bones that are paramount to value in these cars such as original sheetmetal, drivetrain, and interior. There is a full binder of history and documentation for the car, it has been featured in both of my Shelby Mustang books, and it is absolutely turn-key and sorted to perfection with absolutely no needs or deferred maintenance issues. And, it is being offered from my personal collection after a lot of years here which should also offer some idea as to how great I think 6S476 is.

So if you’re looking for a special ’66 GT350 that ticks all the boxes, including being recognized as a legitimate Shelby/Paxton Supercharged car) I’d encourage you to give serious thought to adding this one to your stable. 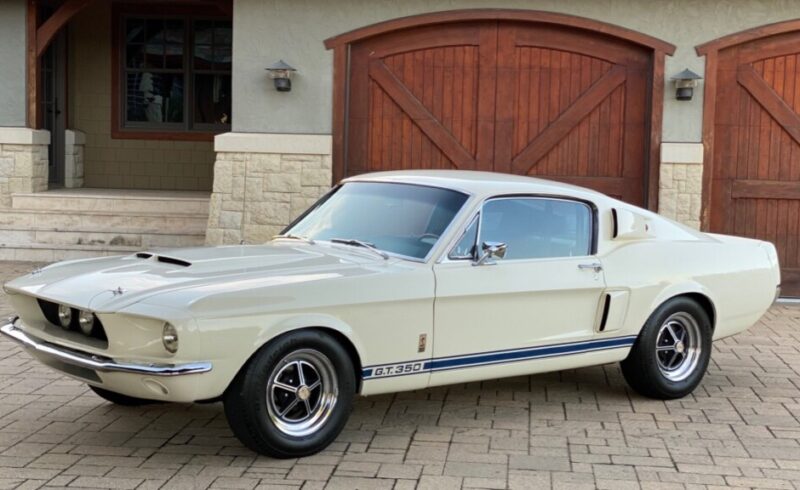